Hello, only me! I have decided to write another travel-inspired post, seeing as this summer I am becoming quite the travel bug, and this time the post is about the wonderful cuisine of Croatia. My boyfriend and I stayed on the Istrian Peninsula, at a beautiful beach resort called Verudela (we stayed in the very modern, beautiful Park Plaza apartment complex), but we were only ten minutes away by bus from the city of Pula, full of Roman history and artefacts. Because we had the best of both worlds; sea, sun, beach and city culture, we were also very fortunate to be able to have many places to choose to eat. The Park Plaza complex itself- a sprawling, village-style resort overlooking the sea- had three of its own restaurants, but we also ventured outside of the hotel.

However, having arrived in the afternoon, on our first evening we went to the resort’s beautiful Restaurant Oliva, a pool bar by day, but a beautiful, romantic setting for a meal in the evening. It overlooks the coast, so diners are able to watch the many yachts and speedboats cruise into various facets of the bay, whilst enjoying well-cooked, pseudo-Mediterranean fair for a respectable price. I chose the ‘Sea Medley’, which consisted of a grilled fish (which they called ‘Noble fish’), two langoustine and some grilled octopus, served with a dressed salad (£12). The whole fish was crisp and well seasoned on the outside, with the flesh delicate yet meaty. The langoustine were sweet and plump and the octopus provided an iron-rich, savoury note. The salad was simple, but let the seafood shine because of this. My boyfriend chose a perfectly cooked rump steak, rare, with fries and a thick and luscious white wine and mushroom sauce (£9). The steak literally melted in the mouth and had a truly ‘beefy’ flavour. For dessert, we shared a selection of local cheese (£5), including a hard ewe’s cheese which was tangy and salty and a beautifully delicate, creamy gorgonzola. For two courses and two alcoholic drinks each, the bill totalled £17.50pp including tip, which I truly believe was a steal, considering the location. 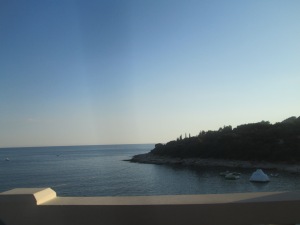 On our second evening we ventured into Pula, finding ourselves enticed by a restaurant which I can only assume translated as ‘Laurel and Hardy’s’, due to the picture on the front of the menu and, fortunately, only a small statue of the two on the terrace (had I known the theme before hand, I may have been put off- luckily the food was worth staying for). We sat on the terrace overlooking the square, where a jazz band played in front of the clock tower positioned next to a beautiful old monastery. We shared some gorgeous Croatian white wine (Croatian wine was a true revelation; well-balanced, fruity and easy to drink, whether red, white or rose) called Malvazija; we loved it so much we bought back rather a lot, and decided to start with some local anchovies and truffle-cheese. Strong flavours to say the least, with the anchovies providing a punchy taste of the sea and the cheese really showcasing the truffle, a Croatian speciality. For the main we shared a meat platter which consisted of perfectly succulent grilled chicken breast, pork chops, herbaceous sausages and garlic and rosemary-infused lamb meatballs rather similar to the Greek kofta. Served with fries, a beautiful tomato risotto, grilled vegetables and a red pepper tapenade which seems to be served with every main meal, we were extremely full and extremely happy by the time we left. Once again, having paid only about £20 per person, including a tip, the meal felt luxurious yet guilt-free. 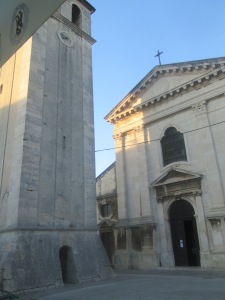 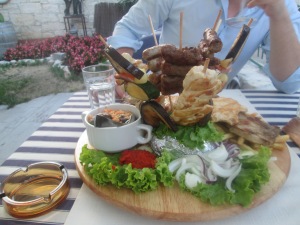 Obviously I cannot mention all of the restaurants we ate at, otherwise we’d be here until next summer, but a truly special meal was had on our penultimate night in the Verudela Marina at a hotel called Ribarska Koliba. The sleek fish restaurant overlooks the various yachts, catamarans and sailing boats (I would recommend taking a boat trip; we went on a glass-bottomed boat for 2 hours, which took us to three separate islands and allowed us to feed fish, all for £10 each). Although we sat inside, the giant ‘windows’ are completely open, so you feel the sea breeze and smell the salty water, without getting too hot. Obviously popular with Croatian celebrities, as attested by the various photographs on the walls, Ribarska Koliba pride themselves on sourcing their fish from a few steps away, at the marina’s market. Because of this, the catch of the day always varies and the ice cabinets from which you select your choice differ greatly from day to day. I chose the Fisherman’s Platter to start with, which consisted of beautifully tender cuttlefish, cold and dressed in a light vinaigrette, garlic and sweet chilli-marinated prawns, smoked tuna steak and a wonderfully smooth white-fish pate on crisp fried brioche. Matt chose a medley of local mussels, doused in a moreish garlic and white wine sauce which you could easily have drunk on its own. For our main I had the Fritto Misto, consisting of deep-fried calamari, snapper and shark. The calamari was, unfortunately, slightly tough (which I find hard to excuse in a fish and seafood restaurant), the shark was wonderfully meaty and the snapper was delicate, but nothing special. The star was the aioli which accompanied the dish; so powerful with garlic and lemon that I could have coated everything in it. The boiled parsley potatoes were soft without being powdery and I enjoyed the spinach, which didn’t appear to be too waterlogged or gritty. Matt chose a piece of bream and two grilled squid. Again, the squid tentacles were slightly chewy, but the white fish was prepared expertly and fell away from the bone. The portion sizes were rather large and we were given unlimited complimentary bread, but this was by far our most expensive meal. With a bottle of Malvazija and an extra glass each (hey, we were on holiday), and two courses, including a tip it was £45pp. However, if you want a special meal in a breath-taking setting, with a varied and tailor-made menu, I would certainly recommend it. 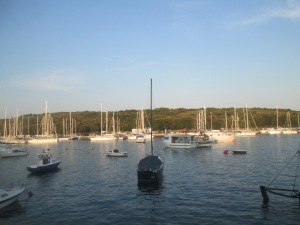 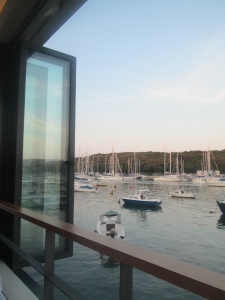 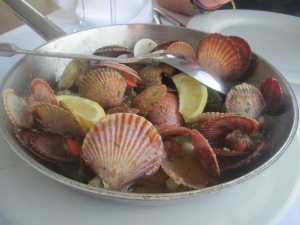 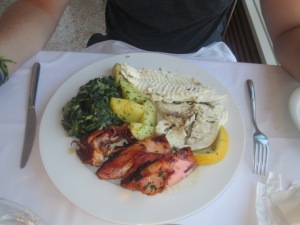 That brings us to the end of our short culinary tour of the Istrian coast; I wouldn’t want to tell you every single detail, that’s for you to discover yourselves! I am currently collating a bank of material over the summer for my next few posts, so I will write another one in a little while, once you’ve all stopped salivating over what you have just read. Until then…

Full time teacher; full time foodie. Based in Essex. For any enquiries please email me at claudiamartin34@hotmail.co.uk or find me on LinkedIn. View more posts

One thought on “My first taste of Croatia”